As an Amazon Associate I earn from qualifying purchases. #SupportsCTMS The Essential Works of Thomas More

More’s major works collected in one volume and presented in chronological order, with features including: modern spelling and punctuation; searchable e-book option; concise introductions and outlines for each text; ample glosses and explanatory notes; 100 illustrations; newly commissioned translations; a reconstructed text of More’s historic trial; and much more. 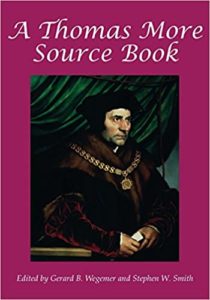 An anthology of the most famous and important writings by or about Thomas More. Also, see our Study Questions. 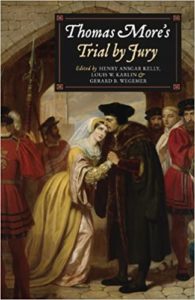 A collection of all the major documents from Thomas More’s treason trial in 1535, analyzed by a team of legal and Tudor scholars. This study draws on extant scholarship and provides fresh analyses of the source documents. 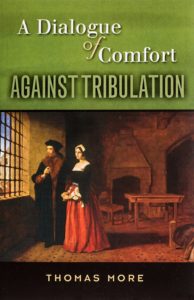 Dialogue of Comfort Against Tribulation

More’s masterful dramatization of how one can find courage and consolation in the face of physical and spiritual trials. 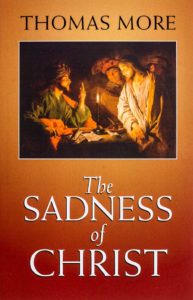 More’s commentary on the Passion of Christ reveal his final thoughts while imprisoned in the Tower of London. For All Seasons: Selected Letters of Thomas More

A newly edited volume for the contemporary reader, this collection serves as a “life in letters” and offers the reader fresh insight into More’s education, formation, and character. Also includes notes and relevant background texts. This edition of the Utopia includes the maps and letters that accompanied Thomas More’s first editions of this work. Also see our Study Questions. This recently published Scepter edition with modernized English presents More’s artistic biography of a Renaissance figure with whom he identifies…while also learning from his mistakes. Includes More’s poems on the 12 rules of spiritual battle, the 12 weapons of spiritual battle, and the 12 properties of a lover. Four Last Things / The Supplication of Souls / A Dialogue on Conscience

Three short works in which More – with his usual wit – meditates upon death, purgatory, and conscience. Called by C. S. Lewis a “great Platonic dialogue, perhaps the best in English,” this book is also said to be “the classic controversy of the Reformation,” and the wittiest. This beautiful new edition, with modernized English, gives easy access to More’s art of conversation with a university student and tutor perplexed by the controversies surrounding Luther and Tyndale. Thomas More: Why Patron of Statesmen?

What were More’s guiding principles of leadership and in what ways might they remain applicable? This collection of ten scholarly essays addresses these questions by investigating More through his writings, his political actions, and in recent artistic depictions. The Cambridge Companion to Thomas More

This is an invaluable introduction to More’s life and writings. The One Thomas More Young Thomas More and the Arts of Liberty

This book analyzes Thomas More’s earliest thoughts on the statecraft needed to enhance liberty and peace in a culture favoring war. It includes a close study of his little-known works, as well as Richard III and Utopia. Special attention is given to More’s integration of Cicero, Seneca, and Sallust in these works. A Man for All Seasons (DVD) This detailed illustration shows an aerial view of London as it might have looked during the lifetime of Sir Thomas More (1478-1535), the humanist writer, statesman, and latter-day Catholic saint who served at the court of the Tudor king Henry VIII.

Originally drawn using a fine line pen on smooth board and digitally colored, the composition is based on the famous view of London from Braun and Hogenberg’s Civitates Orbis Terrarum (1617). A number of important locations relating to More’s life and career are highlighted along with other notable landmarks of the time, including the medieval St. Paul’s Cathedral, which was destroyed during the Great Fire of London in 1666.

The Center for Thomas More Studies seeks to advance the study and teaching of Thomas More’s life and writings, with a special emphasis on More’s understanding of law, liberty, and leading citizenship.

Please support us with your tax-deductible donations.